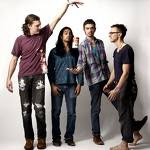 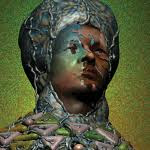 
Though most musicians hate the idea of online leaks, they realise that it is one of the best gauges of popularity. Yeasayer’s debut, All Hour Cymbals went largely ignored through such a process. Hailing from Brooklyn, which has been rivalling Jamaica as the hottest location for creative music, this slight was extremely odd. However, once they began touring with MGMT and Beck, the word got out about them and the end result was Odd Blood, their sophomore, leaking two whole months before its official release date.

Expectations thus are high so what does the band do…well, they stymie us first track up: The Children has much more in common with the arcane sounds of The Knife than anything on All Hour Cymbals. The beat reverberates with an organic feel that spits out warbled vocals within its haunting context. It’s a declarative prop; one that couldn’t have been useful anywhere else and the band know they’re trying our patience early. The pay-off comes next though with the brilliant lead single, Ambling Alp, which opens up with crunchy pop beats (wtf?!) of all things juxtaposed to Chris Keating’s vocals. It’s about-- get this, a boxer but the less thought on that will increase your appreciation for the track. Madder Red flirts briefly with their build up of tension only to release it with a huge musical flourish, but even that dissolves into pop too.

It becomes clear that Odd Blood is a heavy departure by the band from what everyone presumed would’ve been their career template. All Hour Cymbals exploited the rustic nature of rock with a consistency that—while not always great—did produce the goose bump-inducing Wait for the Summer and 2080. Their sense of communal, western chant music was derivative of pop but who knew Keating planned to bring techno and house beats to this new project? While the jury is still out on what brought about this change, the tracks on Odd Blood simply either work themselves out or dissolve trying hard to. O.N.E is particularly delightful, with its steel pans and booming pop appeal and is sure to bring Vampire Weekend comparisons...trying hard to be all things to everyone.

Therein lays Yeasayer’s main crime throughout Odd Blood: indecision. Too many songs are ripped to experimental shreds before reaching bliss. O.N.E is snatched away from greatness right at the end with a weird, intrusive solo overlapping the band’s brilliant chorus. I Remember—with its lyrics their clearest yet—is kept frustratingly in check by piano-based bridges, when it was clear Keating threatened to run its emotional levels to new heights. Love Me Girl opens up with a decidedly underground techno vibe (again, wtf?!) then unwisely morphs into 80’s dance/pop then morphs into the delicious techno again before—you guessed it, back to pulling the curtain down with more 80’s pop. Synths run wild throughout the track until it resolves to end, leaving one dizzy in the ears.

An uncomplicated highlight is Mondegreen, where the spectre of TV on the Radio manifests itself. Here the band gleefully unleashes frantic beats and staccato horns juxtaposed to sped-up dance music. It’s a wild experiment that works because they’re not weighed down by the same great expectations that seem to have caught Tunde Adebimpe around the knees. The album ends with Grizelda, the sole track that would’ve fit snugly on All Hour Cymbals. It’s not more than a few words but it proves that Keating’s decision to turn away from his comfort zone is less than final.

In all this genre-testing though Yeasayer has still not committed totally to one vision and that can be a test of fan appreciation. Thus, there will be hardly any opinion, neither for nor against, that will settle as decisive. Which is the same state the band’s music is in. Credit the band though for yet again nicely tethering on the edge of a breakthrough. Once they decide to stick to a plan they’ll get closer to the inevitable masterpiece that is on the cards. As Keating repeatedly sings on the uneven Rome, ‘it’s just a matter/ just a matter/ just a matter of time’.