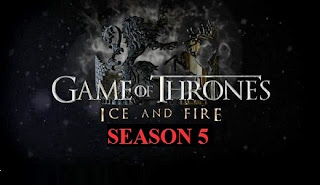 If the previous seasons of Game Of Thrones have been heavy on testosterone, then the opening scene of season 5 makes it clear that, finally, the rough interaction of men is making way for subtle war among the women folk.

We see a young Cersei Lannister (Nell Williams), already cocooned with smugness, ordering a witch to predict her future. What she receives is a warning, one that finds adult Cersei (Lena Headey) replaying in her head en route to view her father’s dead body lying in state. As she climbs up the majestic stairway in King’s Landing, she passes Margaery Tyrell (Natalie Dormer) and they exchange the briefest of looks.

And yet, the significance of this brief exchange runs right throughout the rest of the leaked four episodes of the show. Cersei’s influence in the capital is fading after the death of her son (King Joffery) and father (Tywin). With the prophesy in mind, she knows her other son—now the king—Tommen Lannister (Dean-Charles Chapman) will be lost to her once Margaery marries him. Her fears aren’t unfounded because as Margaery becomes queen again she attacks: intimating to Tommen that Cersei should go to Casterly Rock, an ancestral home, effectively out of the picture.

These aren’t the only women the series has lit fire under early on this season: Daenerys Targaryen (Emilia Clarke) finds herself under attack by a fanatical religious group (The Harpies) after she tears down their statues in Meereen. The Stark girls, Sansa (Sophie Turner) and Arya (Maisie Williams) are at crossroads too. Arya’s journey to the House of Black and White sees her discarding her earthly possessions except for Needle, her sword. Sansa has the tricky proposition of being carried around by Littlefinger (Aidan Gillen) to reclaim her home. One aspect that’s always improving about Game Of Thrones is the style of directing when both of these characters are on screen. It’s simply marvelous to behold the long shots of them handling each situation they’re dealt with.

It’s the women who are jostling for power now, fighting themselves yet realizing that while climbing higher and higher, more difficulties come hurling towards them. Cersei may be rid now of her father dominating her but finds her uncle equally stubborn. If the new season has an Achilles heel, then it’s the unwillingness to reveal all that resides in her mind. For example, where is she going with this religious sect, The Sparrows beyond getting back at Margaery? It’s also unsure how Daenerys can react now that two of her three most trusted protectors are on the verge of being eliminated. Will she have to, at last, turn to her dragons?

Not that the men in the show aren’t jostling for power: Jon Snow (Kit Harington) gets a title but also much envy. Littlefinger, ever the crafty planner, continues to maneuver all before him and even Jamie Lannister (Nikolaj Coster-Waldau) is scrambling to reassemble his family name. The main difference is that while the women of Game Of Thrones are now openly in opposition to each other, the men are seeking redemption and that takes them on paths of isolation. As we get to the end of the season though, it’s clear things will erupt and the body count rise. Fans of the show know that the producers are in no hurry to reveal their hands, so bunker down and get ready for the long haul---the deaths are coming. 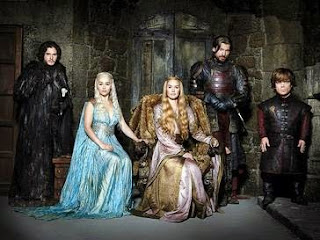 So much promised death and destruction is to come this season but hardly anything can match the heart-breaking scene in episode two when Drogon returns home in the middle of the night and encounters Daenerys. Her instinct as a mother is to reach out to him but she is stopped when the dragon swoops down slowly and sniffs her then soars away. As she watches him go, no tears form but the implication is clear: mother can’t stop or control the coming winter now.

Posted by Immortal Critic at 12:27 PM No comments: Links to this post