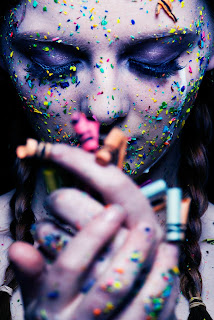 It's been years since I've written a poem, new or even sketch...truth is reviews are the main focus of my literary life. I haven't lost the drive for it but there still remains such a need for critical analysis for the arts that there I remain, "the critic". Nonetheless, I was inspired today to post a poem (February 2005) called BEAUTIFUL CHAMELEON.

The title is based on the state in which poetry is received and the poet him/herself. In this case, it's inspired by Kei Miller, after a reading I followed him to at Poetry Society that year. A poet has to be a chameleon, like any performer, especially when reading their work. Personally, I've never enjoyed that part of the process...I much prefer the reader to open up a magazine and interpret for themselves the words. For i feel once you read it, its meaning to you flies through the air and deposits unto minds with its own new, twisted meaning. It is also a one-time thing, unlike in print where it can be revisited.

Kei, or as most of us call him, Andrew, has the gift for live speech. I wanted to capture that as well as the willing audience in Jamaica: they came to be charmed because his star was ascending and the poetry was secondary to that rising star. The poetry was but the excuse to bring them together. Imagine their faces when they find out that amid the spectacle that they've actually been 'touched'...that poetry really affects them in ways they were not prepared to be affected.

I remember: those locks shook noisily
when rain fell on the encircled arena.
by the dug-out there's a tree, unnamed Muse,
yet you wrap its leaves around your fingers still,
fresh with the scent of your joint.
Hidden from view by growing grass,
the chameleon has gathered the witnesses
making little circles in their seats.

Rainy night at the open yard session,
incense snafus on the air,
on the chipped mike
the chameleon is raw.
Nervously his smoke sinks in the pit
of bellies a-quiver for more smoke,
any smoke...


The lingering, torn duplicity
that graces them all finds flight, rolls over.
I wonder: are they into a new meter and
forever metamorphosed now? 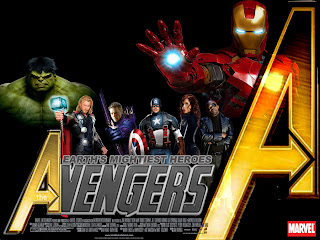 Two years ago when Joss Whedon (Buffy the Vampire Slayer, Cabin in the Woods) announced that he’d be directing The Avengers, millions of comic book fans held their collective breath. They can exhale now and loudly too because Whedon has not disappointed them nor the many nervy studio execs at Walt Disney. The film may have a hefty $220 million production price tag to it but, rest assured, the returns will be more than merely adequate. Under Whedon’s direction, the film does a very neat and tidy trick of pacing itself to the point of the expected then, out of nowhere, settling into a heady sequence of imagery, yet never forgetting all the various players in motion. While not on par with The Dark Knight (best to make this unfair point quickly), the film does continue the recent trend of comic book adaptations being done extremely well since that film’s release (Star Trek: First Contact, X-Men: First Class). There are many theories as to why this is happening now but the most logical one is that studios have finally realized that to adapt a comic for the screen, they must hire a comic fanatic to direct. That is exactly what Whedon is, an unabashed geek who has devoted his adult life to such a cause. The proof is also into the writing (Whedon again) and the seamless action that weaves a spell into it. Once Loki (Tom Hiddleston) rips through a portal from space to Earth via a Tesseract (unlimited energy source devise) in search of power and trouble, the action gets going. He uses his godlike powers to manipulate the S.H.I.E.L.D agents out to restrain him and ends up stealing the Tesseract for himself. The head of S.H.I.E.L.D, Nick Fury (Samuel L. Jackson) manages to escape the encounter and in a desperate move activates an Avengers Initiative. This A.I. group is Natasha Romanoff (Scarlett Johansson), Dr. Bruce Banner aka Hulk (Mark Ruffalo), Captain America (Chris Evans) and the irrepressible Iron Man (Robert Downey Jr.). A lot of egos to be sure, some more than others, but Fury keeps them in check even though questions begin to pile up. When Loki turns up in Germany, the team apprehends him before coming face to face with his brother, Thor (Chris Hemsworth) who trades blows with Iron Man before they decide to focus on Loki’s intentions instead. The Avengers up to that point settles into a sort of uniformity that mildly informs and entertains but it’s what happens next that shows us the genius of Whedon’s script. As proved by his previous work, we know that Whedon is an auteur with respect to classic action…he’s no bard but functionally poetic with whatever tools are nearest to his hands. In this case, it’s a motley crew of heroes that need to band together for the survival of the human race. Within the bond, a few intriguing moments occur and we’re witness to them instead of merely acknowledging them. This is a film not just for fans but for the curious as well. Whedon also allows for a tie-in of epic proportions with the back-story of Hulk, Thor, Captain America and Iron Man…indeed, if the respective films on these characters were shaky, then this coalition effort thus makes for a safety launch pad for future adaptations, whether singly or together. When the Tesseract eventually rips open the cosmos and evil begins worming its way into New York, the CGI action trips fantastically into full effect: from Hulk’s smashes (the unquestionable star of the show) to Iron Man’s laser power. The Avengers does deposit a lot of blame expectedly on Loki but it also traps him within his own fury, his powerlessness. His story doesn’t get lost among the others but works within a context that shows them all as vulnerable yet redolent simultaneously. When Agent Colson (Clark Gregg) tells him his actions lack conviction, the fury glints in Loki’s eyes. Most comic adaptations don’t delve too deep behind the monster but here Whedon---through frames of brotherhood—tells Loki’s story without dehumanizing him. What it also reinforces brilliantly is that he will never rise beyond it either…which is what the heroes are able to do. Nick Fury has to threaten, harass and embellish the truth to get them ‘there’ but once they get going then The Avengers rises to its own maximum potential. And when the danger is past, a stunning effect occurs: the camera goes through the global reaction with input from the different races, age-groups etc. It’s the collective appreciation of heroism that for once isn’t forced or corny. The Avengers manages to allow these heroes to do what they do best without denigrating into assholes or totally boring us with their single points of view. That Whedon spins the black circle on them endlessly and comes up winning every time is nothing short of remarkable. He’s pulled off a massive enterprise while doing the trickery involved to keep us awed until the sequel or the next Marvel adaptation that’s no doubt coming along soon. RATING: 8/10
Posted by Immortal Critic at 4:30 PM 2 comments: Links to this post