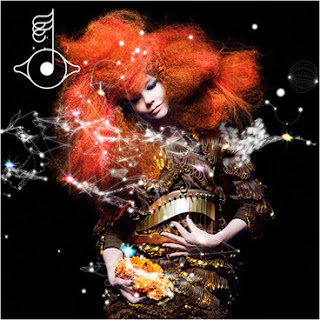 There are two types of people in the world: those who knew who Steve Jobs was and those who did not. How the latter group can actually still exist puzzles me but they do and, as frightening as that is, it remains ironic that they’re the ones who clamor for his iconic products the most without even realizing it. For, what would be the tech world be without the Mac (Apple, not BK, kids) and the iPad, both portable devices that have revolutionized our involvement with the internet and music. The genius of Jobs was not only the equity he invested in invention and implementation but also that he understood greatly the personal, almost fanatic relationship between the user and product in contemporary times.

As we’ve progressed into the twenty-first century, that fanaticism has extended towards the very art we consume as well as to the innovators that produce it. In the field of music, no solo artist trends on of this wave longer or more consistently than Bjork, the Icelandic singer who has blazed an almost Jobs-like path these last eighteen years, with stunning music videos and gorgeous concept albums. It’s been an impressive streak, one that has dragged electronica and Brit pop out of near obscurity (Post, Homogenic) into a splendored thing and positioned her as the leading exponent of both genres. More recently though, in the second half of her career, she’s embarked upon defining love as the central form of expression(Vespertine, Medulla) to coincide with the personal decisions of her life. While lauded initially, this phase has come under the microscope ever since Volta (2007) failed to find resonance with most of her fans.

Bjork is nothing if not persistent however and the stubborn genius that resides within her feels that her extremity will win all over eventually. So, though to the average music fan she’s the crazy exotic who wore the infamous swan dress to the 2001 Oscars, she’s made plans for them. She’s also aware that critics have helped herald the rise of a certain Sri Lankan-born pop terrorist to usurp her as the leading pop brand but she’s seen these insurrections before. She also knows that we’ve been wondering just how deeply her partner Matthew Barney has influenced her art direction.

So here we are with Biophilia, her long overdue eight solo album. It’s more than just a studio album however but a multi-media release that tackles the visual as well as the technological aspect of her music. Here the Jobs comparison becomes apt because all of the album’s ten tracks were partly recorded on an iPad, with accompanying apps to be downloaded to enhance her vision. Apple has even shrewdly thrown in a game and allows the listener to remix parts of the songs for themselves and hear concert footage as well. It’s a heavy-loaded project but one that feel like a natural progression for Bjork. The past ten years have seen her moving away from singing about technology to incorporating it heavily into her world. The range here runs from the use of a gameleste – a fusion of gamelan and celeste—to electronic pyrotechnics pummeled out on a laptop.

All this info fascinates but listening to the songs sans the apps, the vision of Bjork remains clear in weaving her own interpretation of the microcosms that guide the natural flow of our universe. This includes her own rejuvenation, heard clearly on opener Moon, a glorious offering that teems energetically with its ‘all birthed and happy’ mantra. Thunderbolt bridges the gap between her worlds, with its heavy orchestrated flow giving way to her vocals and video game-like synths. It’s a welcome concession from her that though we’re deep within her folds, Bjork must not lose us as she did on Volta. You hear it in the way Crystalline smoothly blends its burgeoning hip/hop beats with her soaring growls while Hollow’s theatrical groundswell tilts just at the right emotional level. The rest of the album breaks on either side of these two song concepts, some with better results while others maintain a restrained pace. All however slow their tempos as if to have her remain in an exquisite time warp of primeval sounds and rhythms.

It’s far from her peerless days (Homogenic,1997) but if her last opus fell prey to its own intricate design, then Biophilia is the spiritual re-emergence from all that indulgence. Or maybe it’s a widening of the chasm but with upgrades added that allows the listener to choose the accessible parts for themselves. Irrespective of our participation though Bjork continues to sew together a patchwork of her most personal ambition as well as to expose the inner working of her fecund mind. It has reaped much joy before—the huge emotional crest washing ashore on Pagan Poetry, the love letter being written with heart-breaking gestures on Hidden Place, both tracks from Vespertine. It will continue here as well but the album is at times inaccessible for attracting new listeners but the old faithful will find it utterly compelling and rich, especially with repeated listens. It won’t matter much now the advanced technology involved but it is heartening to know that this heralded first ever app-album is indeed the watershed moment in popular music that we’ve felt it would be. Time will tell if this whole new world that she’s spent three years creating will yield even greater results or if there’s a third act (or app) in the making. We expect nothing less from her because that’s the very high stakes by which this woman’s inimitable career has always been marked. For now, she’s forged ahead of the pack yet again, daring everyone else to step up their game. Your move again, M.I.A. 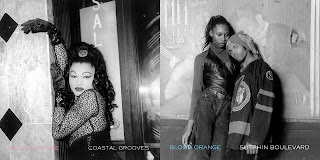 When last we left him, Devonte Hynes was busy releasing a sophomore album for his more famous moniker, Lightspeed Champion (Life is Sweet, Nice to Meet You, 2010). In my review, I noted Hynes’ relentlessness as well as his innate genius of mixing pop and rock vis-à-vis his slavish love of pure forms keeping him in one skin too often. The talented twenty-five year old hails from Britain but has been so formalized in the mid West that you’d be excused for mistaking him as American. His debut album (Falling off the Lavender Bridge) was a solid introduction to his aesthetic, which is quickly catching on: he’s been writing a lot recently for Solange Knowles (Beyonce’s sister) and Florence and The Machine.

A year later and he has reinvented into something totally new. So new and mysterious that I’m not sure how to describe Blood Orange other than to say that Hynes has finally gotten that complimentary swagger he desperately needed. Or, maybe just gotten in touch with his depressed, feminine side. Like all compulsive-driven musicians, he’s tossing off ideas that others can only dream of inventing. Coastal Grooves is interestingly configured because its evidence of his own growth as an artist receptive to openness.

The immediacy of the guitar work coalescing with electronic beats on the opener, Forget It shows that Hynes has been hard at work. It’s a simple song, most notable for one line (‘I am not your savior baby girl’) sung many times over but its sheer minimalism is pleasing. Instantly Blank inserts gorgeous aside vocals that nearly steal the show. Hynes has stated that his reference for the album were basically drag queens of the very distant past and the cover shot for the album is indicative of this. He has stated also though that it was not meant to be a personal perspective from him on the issue that would arise and that’s where he runs into a few problems. All art is viewed through specific lenses and the author cannot extract himself from the written or sung word so Coastal Grooves is a definite balancing act.

Things are most balanced when Hynes rips away the self-efficacious masks his characters wear: the bluesy solution fronting Champagne Coast, the stark propulsion facing the doomed girl in Can We Go Inside Now? Or when he’s channeling transgender influences in an attempt to tie sound and sexuality together. A sense of sadness perforates the album as well but this can be tricky and he either hits or misses with the ten tracks, depending on the mood that’s set. It doesn’t help that his dissection of pop as Blood Orange doesn’t loosen up the techno and dance beats as expected. He instead uses a lot of dubs and minimalism, which work to an extent but doesn’t provide transcendence. Nor is there much wry humor either—something he’s provided in spades as Lightspeed Champion. More results like Madame Van Damme and Galaxy of the Lost would’ve done this project a hell of a lot good.

Coastal Grooves doesn’t exactly push through its intended denizens or reveal the hidden: Hynes tries hard to replicate the queer night-life but ends up with something that sounds more like the cool, straight guy’s perspective instead. The overlapping jazzy texture that dominates the record is his stamp but there’s little connection to the source material in its actualized form. Coastal Grooves is a highly romanticized look at multi-dimensional personalities to be sure but it’s just not them telling these tales. It’s fascinating in parts but that’s because Hynes is the type of nerdy genius that enthralls…which leads to another issue. You’ll listen to this project and end up forgetting everything else except his silky voice and solid grooves. The artistry involved though is too medicinal because he’s taken the excitable and loquacious and simply cleansed them with sterile normality. It’s a little lost on him that people go to clubs to enjoy a bit of escapism…to become something temporarily that they cannot be during the day. To experience the excitement of strangers, to flirt unashamedly or to merely unwind with the besties and bitch about work.

Yes, Hynes does well to accompany his subjects into their world but he’s nailed them to a wall of intense scrutiny without as much as any of the aforementioned joys or even a Cosmopolitan to sip on while waiting for last call. This wide-eyed Q&A wearies after a while because, seriously, who wants to focus on their problems while their having fun? Hynes seems to think otherwise and I’m guessing from now on they’ll only have him tag along because he’s the designated driver.