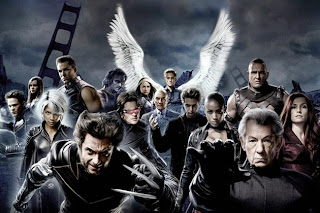 The new X-Men film begins with a sneaky bit of evolutionary theory: mutants being defeated by more-advanced mutants. Technically, they’re called sentinels and they’re not here to joke around. As they ruthlessly crush the band of mutants amid some spectacular scenes, it all suddenly disappears.

What we’ve actually been witness to is something that’ll never happen…a tricky circumstance that is explained to Professor Xavier (Patrick Stewart) by Kitty Pryde (Ellen Page), a mutant who has the power to project a person’s consciousness back to the past and alter fate. Kitty’s power isn’t enough to stave off the dystopian present time that all the surviving mutants have found themselves in however, including Magneto (Ian McKellan).

“This might just work, Charles”, he utters after figuring out how to maximize Pryde’s talent but it takes Wolverine (Hugh Jackman) to volunteer himself for the back-to-the-past mission because of his indestructible powers (which apparently extend to his mind). These are the opening fifteen minutes of the film and they are the most trying moments because Bryan Singer’s vision asks you to suspend reality amid the knotty trail. He also borrows heavily from other outstanding sci-fi films like The Matrix and Terminator 2 just to get going.

Once Wolverine returns to the past though, Days Of Future Past takes off and Simon Kinberg’s screenplay takes shape. We revisit the 1960’s where it’s revealed that the sentinel program got started by Bolivar Trask (Peter Dinklage) who was killed by Mystique (Jennifer Lawrence). She was then captured for research purposes and it’s her mutant DNA that enables the sentinels to defeat mutants in the future. Wolverine must put a stop to it before things spiral out of control or before Magneto’s thirst for revenge against humankind kills them all. For, rest assured, Magneto goes for the jugular in Days Of Future Past in a manner that not even Xavier saw coming. Like the sentinels, he means business.

The main difference between Days Of Future Past and the excellent First Class though is the distribution of minor characterization. While both McAvoy and Fassbender are simply outstanding in their respective roles (Fassbender continues to defy all conventional logic of anyone being able to best McKellen for this villainous role), the other mutants are mere paperweights, scarcely explored for their own complicated lives. Indeed, at one point, when Storm (Halle Berry) re-emerged onscreen I had long forgotten that she was even in the film.

There’s some triumphant scenes along the way however with these characters: the segue with Quicksilver (Evan Peters) playing ping pong by himself and breaking Magneto out of the Pentagon is sheer genius, indeed worth going to see the film alone. When Trask’s mutant-gene tracker goes off the first time, identifying Mystique’s presence at a secret meeting, the awkward sound and chatter is stunningly appropriate. There is also a simple yet devastating scene when Magneto has made up his mind to fire a gun and Xavier pushes him aside. As Mystique flees through a window, we see Magneto fall back but flattens his hand and the gun goes off anyway. 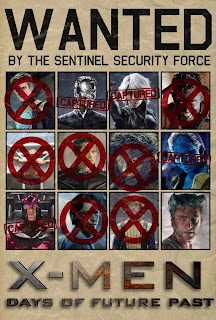 Such detail can only come from a director deeply invested in his source material and Singer is in top form, exploring feelings of alienation and difference through the characters. There are jittery, hand-held shots of Mystique and Beast (Nicholas Hoult) on the streets of Paris, bare for the public to scrutinize them. Though the attempt to tie in the mutants to actual global events is iffy early on, once President Nixon’s (Mark Camacho) paranoia hits the screen, it becomes believable. The ending sequence is brilliantly paced, juxtaposing the changing tides of events as they occur.

While the film continues to reveal new layers of the special relationship between Professor Xavier and Magneto, it also clarifies the main vexing issue between them: Mystique. For the first time in her life she’s beginning to understand her own uniqueness and, ultimately, feminist independence from the two men she loves the most. It’s messy for her to choose between these two “dads”, mainly because combined they’re not a home and separated, both lack what the other one has to develop her into a fully-formed individual. It is this inherent flaw—and not their ideological differences—that makes it difficult when all three are in a defined space. The camera finds Mystique often looking from one to the other, heavy in indecision about whose theories suit her best.

It’s a state of flux that Days Of Future Past isn’t able to resolve totally even after it dawns on Mystique that Magneto is only out to kill her as the simplest way to alter the future and nothing else. It’s that perfunctory for him yet, like the raison d’être of the film, its succinctly to the point. With Magneto at least Mystique knows what lies ahead: Xavier on the other hand is like a kid who’s had his prized toy taken away from him. And every now and then he wants it back.

Posted by Immortal Critic at 7:30 PM No comments: Links to this post