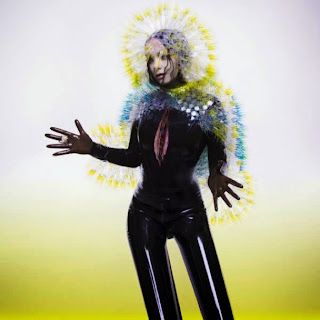 By any pop music standard, the news came quickly: Bjork announcing just this very week the intimate details of her eighth album and then, less than twenty-four hours later, there it was on I-Tunes and on various download channels.


It’s a lot to take in: this is Bjork we’re talking about after-all and we’re used to the slow, steady build-up of her music. We usually get advanced background information too—who can forget the groundswell of curiosity that greeted her last album Biophillia, which was hailed as the first app-album in music history. But, that was nearly four years ago and, her ceaseless innovation aside, a lot has changed for the Icelandic icon. She had throat surgery in 2012 and got divorced from Matthew Barney a year later.


Vulnicura, a made up title, is her processing the turmoil of the break up while adjusting to the changes of her voice. Hence, the lyrics are especially poignant and sung quietly, without her trademark growls even though a few tracks threaten to unleash them without prior notice.
A lot has been made about the production value of Arca and The Haxan Cloak on the album but any Bjork album really only focuses on one thing: that sultry voice. A few tentative moments aside, when she lets it caress songs like Lion Song and Family, the familiar blissful awe of Bjork’s stature as the greatest female pop musician since the mid-1990s is strongly reinforced.


One senses that her career, in the quiet, off-air discussions of her fans, is being put into a before and after Matthew phase and Vulnicura could mark the decisive push to her return to underground dance music. She’ll never abandon brooding guitars (notice the glorious arrangement that drives Mouth Mantra) but parsing the tea leaves of her failed marriage clearly won’t last forever. How she juxtaposes her emotional output to various production experiments has always been Bjork’s unique gift. No other female artist, not even M.I.A has manages this tricky task as long or as innovatively. Even in its most subtle moments, Vulnicura manages admirable flourishes: you can’t listen to Quicksand and not chime in with “pop, pop” when the chorus begins. Or not sing along with her and Anthony Hegarty on the opener Atoms Dance when he steps in and she goes with the flow. In these heavenly moments, Bjork finds rarefied air and knows how to manipulate them for full effect.


Which leaves the question: what, at this point—twenty years into her meteoric rise—is Bjork exactly? Pop goddesses who redefines agelessness? Club godmother waving an unique wand? Visionary icon unwilling to rest on her laurels while showing up the competition? Does she still seek love or is she up late at night worrying as she approaches her fiftieth year?


We may never get all the answers—surely they’re not to be found on Vulnicura—but it’s nice to know that even with her technological interests, Bjork can still connect to her heart, just like she did at the start of her Matthew phase when she released Vespertine fourteen years ago. As she croons, ‘maybe/ he will come out of this/ loving me…’ on the heart-breaking Lion Song, it’s clear Bjork is looking back to find inspiration to soldier on to an uncompromising future. Like Janus, she is two-faced looking on…hopeful yet never stopping to harbour regret.


Posted by Immortal Critic at 1:27 PM No comments: Links to this post