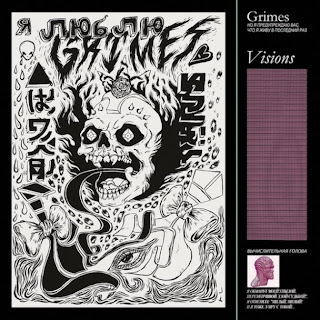 As a music critic, the discovery of a new artist headed for domination is an indescribable joy to watch. It isn’t a sound science but more like a gut feeling co-mingled with a steady appreciation of their art and more than a slight obsession with their every nuance. It’s a feverish clarity: think back to how Addison DeWitt, deadpan, tells Margo in All About Eve, that there are very few true stars in the theatre…she being one of them but, in time Eve, her understudy, would be too. Since the start of this decade the one name that has resonated across all music critics minds is Claire Boucher aka Grimes, the Canadian club denizen who has just released her debut album for 4AD aptly titled Visions.

Grimes first gained notice two years ago when she released a pair of minimalistic albums (Halfaxa & Geidi Primes) and followed up last year sharing a compilation with fellow Canadian d’Eon titled Darkbloom. The five tracks there showed vast improvement in texture, so much so that Vanessa was, without doubt, the best song released in 2011. When word circulated that she had a new album coming (confirmed by her personally to me via Twitter) then the countdown for her coronation began in the media. First there was the release of Oblivion and things went into overdrive once the Genesis video manifested.

Given the diversity of her music appreciation though, especially Mariah Carey pop ballads, it’s not surprising to hear Boucher actually singing higher notes on the album and succeeding. Visions opens with a breathless intro, the short but snappy Infinite without Fulfillment which serves notice of the art-pop brilliance to come. The aforementioned Genesis sees her best musical diversity yet, with its pre-programmed beats perfectly encapsulating her use of vocal tension and juxtaposition of rhythms. At four minutes, the length of the song is typical Grimes but there is no fluff added, just her voice being orchestrated into a beautiful result. It’s a stunning concept, a forward-thinking bridge between underground electronic music and pop, one of the best singles we’ll hear all year. Oblivion has no such aim, just good old fashioned pop, with slightly operatic vocals. Eight is straight electro-pop, replete with a robotic voice overlapping her own pared-down vocal work. Several lush shrieks are thrown in for good measure and I’m sure when M.I.A gets wind of this track she’ll curse her luck for not coming up with the idea first. Sadly, the track serves more like a tease and not a fully fleshed-out manifesto. Circumambient pleads for a lover to understand her weirdness, the electronic beats cracking at a smart 808 pace. Here is where Boucher achieves what is perhaps unique to her: a perfect fit between vocal urgency and beats, for at times its difficult to differentiate both tools amid such beauty.

Boucher’s star shine is evident mostly though on the remaining tracks, as incredible as that sounds. From Vowels=Space and Time to the end, she turns the versatility of her art up several notches. She comes down a peg but the full range of her influences begins to show and the closest approximation of her sound is clear: early Kate Bush. Just listen to the opening of the brilliant Nightmusic is proof enough that within her personal arsenal, Grimes can throw enthralling mysteries out in the open of her seemingly monochromatic bag. Each track gets painted in glitter and the type of night life aura that has backfired on other artists. When she brings fierceness to her vocals to match her beats then that’s when she can trip out into a whole other galaxy…taking us on the ride of a lifetime (the aforementioned Vowels=Space and Time). When she stays in cyborg-pop mode however then the result is still decent (Be A Body) but as we’ve already witnessed, she’ll be beyond such simple concepts from this point on.

The truism of Visions though is that Boucher has conquered her target: completing successfully a triptych by her love of twisting beats and rhythms. Now with the emergence of her voice as a strong point her oeuvre is so strong that she could have recorded bird droppings and still scored BNM from Pitchfork and anyone else. Her sights must now be to fully subvert sound into longer concepts for I wonder how much more fabulous Skin—the album closer—could have sounded if for once she had foregone the minimalism. Not to mention the scattered Nightmusic, a song that feverishly runs its gamut so effortlessly, one trembles in awe at the thought of what her next album will sound like. So, like Addison de Witt honing in on Eve, I’m terribly excited about Boucher’s progression of art, just as how I was when Janelle Monae surfaced five years ago. Boucher will possess full genius soon; Visions is but the best step so far in a pioneering career that won’t ever leave night clubs fully but rather pull everything else within that frame. Like Bjork before her, Boucher’s place is atop a genre in need of instant recognition. In short order she’ll be that somebody.

RATING: 9/10
Posted by Immortal Critic at 2:27 AM No comments: Links to this post