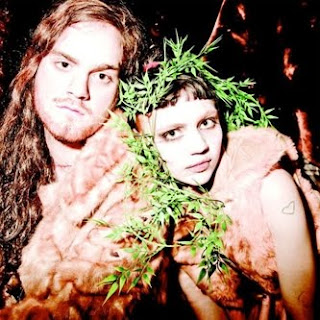 Like most love stories, this one started with a picture then a Google search. The monstrous cover shot for Grimes’ brilliant single last year, AVI, had me hooked almost as immediately as her lush vocals easing through chillwave in a manner that demanded more than just fleeting attention.

Not even I though could have imagined that with Darkbloom, her split opus with fellow Montreal pop scion d’Eon, she would transform the genre into an expose of even weirder yet fascinating ideas. Her pair of debut albums last year (Halfaxa, Geidi Primes) was mostly minimalistic in aim---the type of art-pop music that critics love to highlight and secretly hope will take off in the mainstream. But if it felt as if she worked within an exclusive frame back then, her five tracks here are, at last, unifying all her strengths into one almighty mindf_ck of an effort. Ladies and gentlemen, Grimes is the artistic name for Claire Boucher and if you haven’t heard about her in indie blogs before then I present her to you now.

After a brief intro, we’re smack into arguably the best song of the year so far—Vanessa. AVI proved last year that when she sports dance riffs she can move mid-sections without really trying. Vanessa takes this a step further by juxtaposing pop and techno into her mesmerizing wall of sound technique. It’s mathematical but unlike Lady Gaga, Grimes isn’t fearful of letting her grooves do all the talking or trying too hard to engineer a hit. Only the peerless Robyn has better pop songs out now because she’s able to weave actual stories into her music. Grimes focuses more on reverb and synths but when one considers that she’s been around for only a year, a track like Crystal Ball is even more stunning for that fact. The beats slam hard, colliding blissfully with her puerile vocals (‘faster/ faster/ the lights will flow…’). Urban Twilight returns to her minimalism but this time the twisted vocals and nefarious beat run in a spell that works. The ending track, Ivory, is the only one that feels like a left over from last year. It indicates that she has a lot more work to be done before she’ll control the world…right now she’s capturing hearts and critics with this continued search for deliciousness. Given the impact made here, I’d say she hasn’t that much farther to go.

Indeed, her interpretation of underground pop matches up greatly against everything else is out there. Only Austra (look her up!!!) currently has anything remotely going on for her in the chillwave genre, but she is a distant second. Grimes has already reached an artistic level within pop and club music circles because, again, unlike Gaga, she has stuck to the task. She’s not hiding weakness in garish music videos nor curtailing new wave ambitions short just for a happy GLBT moment.

The album isn’t finished there however as d’Eon contributes four tracks. Grimes is a hard act to follow and most critics so far have made that known but he more than holds his own. Fresh from a critically-acclaimed debut last year (Palinopsia) he announces himself with the mobile phone buzz fest instrumental Telepathy. The remaining tracks are all uniquely brilliant dance-pop songs, the type of songs that Toro Y Moi tried but failed to pull off with his sophomore earlier this year. Thousand Mile Trench is silky smooth, almost bluesy love-making club music. It features the requisite electro- hi claps but the instrumental mash-up towards the end—while betraying a certain reticence—only builds us up for the breathy finale. Tongues is more standard in structure but it one-ups both James Blake and Jamie Woon for sheer synthesizing seduction value. And if he hadn’t already proven not to be merely another white act digging on R&B for inspiration, Transparency is his masterstroke, full with two-step and electro-pop flourishes that renders the notion that only black musicians can wring funkiness out of soul redundant. I can’t think immediately of any of the standard black soul-pop solo males doing anything this ridiculously good and effortless.

I hadn’t known of d’Eon—whose first name is Chris-- before so there were no expectations and I still haven’t heard his debut (though, he is in my ‘like’ group now on Facebook) but given the start Grimes gave him, he has delivered a stunning end to a rather innovative, quirky project. Darkbloom is a fitting title because the brilliance of the album releases itself slowly with repeated listens and opens up its delights within your headphones. It is also a bonafide album of the year contender and keeps both artists firmly entrenched in that ‘next big thing’ category that is increasingly centering on, of all places, Montreal, Canada.