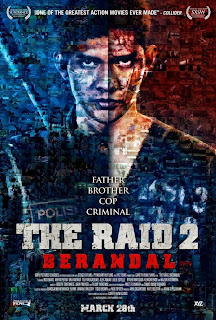 In Greek mythology, the hydra was a vicious monster that grew double the amount of heads anyone chopped off it. Since then, the term has been mostly associated with global crime organizations like the mafia or any country’s warring groups for that matter.

The first Raid film shielded the viewer from this maxim, instead director Gareth Evans focused on how a police operation on a shady-looking apartment complex turned into the deadliest Asian bloodbath ever witnessed on camera. Everyone came under gunfire and most of them died terribly. The bad guy was killed by the corrupt cop who walked away with the good guy. It seemed too-good an ending for such a bloody film. If the first film dealt with one main bad guy then this installment—by virtue of its title, ‘Berandal’ means ‘thugs’—intends to spread the evilness around.

And, indeed it has. The Raid 2: Berandal starts almost immediately after our hero Rama (Iko Uwais) waves goodbye to his brother, Andi (Donny Alamsyah) and heads out of the compound. Unbeknown to all of them, other criminal factions have been watching the showdown and now that the local boss has died, they’re moving in to take over. Andi is dragged unto an open field by the ruthless Bejo (Alex Abbad) and killed after failing to follow through with a choice that was more a directive. In these opening minutes, through the snarky Bejo, we learn much more than the first installation of this franchise let on and we come to realize not only what is to come but why it will come to pass.

Bejo is a rising star in mercenary circles and at his employ are skilled assassins. His biggest weapon though is one of infiltration—playing on the fears of the younger generation that they’ll never rise up and succeed their old, more powerful bosses. We realize that Andi is killed because he is of no more use to anyone alive and because, in Bejo’s eyes, he isn’t ruthlessly ambitious enough.

On the other end of the power spectrum, the corrupt senior cop from Raid: Redemption, Wahyu (Pierre Gruno) is killed by a fellow senior cop because of his ruthless manipulation on both sides. Rama finds himself in de-ja vu as he is asked to go on another secret mission, to bring down another gang network. The senior cop, Bunawar (Cok Simbara), moves quickly to ensure Rama is embedded in prison—and virtually hidden by prying eyes and ears that may have ulterior motives. “There’s no such thing as a clean war”, he warns Rama, who is reluctant at first to take on the task but after learning of Andi’s death, he finally gets on board.
Once incarcerated, Rama makes sure to catch Uco’s eye (Arifin Putra) and it is at this point The Raid 2 takes off with a series of spectacular pencak silat (Indonesian fighting style) sequences. First, we’re treated to a muddy prison yard where guards allow prisoners to beat up on each other before intervening. Next, Bejo moves in on Uco and offers him a deal that he knows he won’t refuse.

It’s this deal that breaks the ten year truce between the two rival Jakarta clans, both realizing too late the destruction that Bejo is willing to unleash just for ultimate power. Unlike the first Raid film, here we are witness to frighteningly diverse set of mercenaries: Hammer Girl and Baseball Bat Man, two terrifying siblings who wield weapons as if they were paperweight. Along with the Assassin, they start an attack that leads the two rival clans to launch counter-attacks that even has the corruptible part of the police force joining until all hell literally breaks loose. They all turn on each other in a brilliant, bloody finale that Evans expertly guides so that the viewer doesn’t miss any single thrill.

Like No Country For Old Men before it, The Raid 2: Berandal is a stunning expose on the different generational takes on violence. One level gives way to another and all the messy shocks and upheavals that change brings. While the older gang leaders can sit quietly around each other and dream of “peace”, this notion of calm is scoffed at by their younger counterparts. It’s the totality of control that they want and they want it now—no matter who gets killed or maimed in the process. That the elders fail to recognize the same viciousness in their younger charges that heralded their own rise is their own tragedy. It’s cycle often repeated, whether a hero comes along to intervene or not. Rama wins this round with sheer determination but somewhere out there under the Jakarta sky lies yet another Bejo, carefully planning…carefully beheading several hydra heads to rebuild two-fold and come back to claim the underworld again.

Posted by Immortal Critic at 5:51 PM No comments: Links to this post