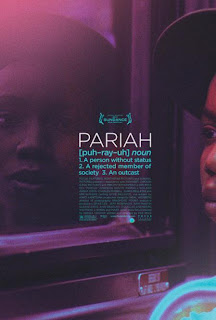 Though it premiered at the 2011 Sundance Film Festival to high praise, most film goers would have only heard about Pariah through an unlikely source much later on: Meryl Streep. In what is becoming a colorful tradition, the great actress continues to highlight exceptional performances and good films in her acceptance speeches. Sure enough then as she lectured to us from the Golden Globe podium trip this year, she let slip the name of Adepero Oduye and Pariah.

Released officially after Christmas last year, Pariah is the tale of Alike (Oduye), a seventeen year-old who must come to terms with her burgeoning lesbianism. Set in Brooklyn, the film tackles the multi-faceted issue with complex characters and a social standard that seems unbending and reserved. Skillfully directed by newcomer Dee Rees, Pariah is every black parent’s nightmare when the obvious becomes, well, more obvious.

That sense of obviousness greets us immediately as we witness Alike (pronounced ah-lee-kay) and her BFF Laura (Pernell Walker) in a strip club checking girls out. Laura is a popular butch (the lesbian term/equivalent for thug) but has a genuine friendship with Alike. She looks out for her because she knows the struggles to map out an identity. Alike, like most neophytes, thinks she is unique in her self-discovery and issues, so she juggles her fears and boldness in giant-sized and baby steps respectively. She has already realized though that to experience her gay self, she must have separate identities. So, after the club, she makes sure to make her attire more ‘girly’ by the time she sneaks home.

Rees’ film thus hits upon a notion that is seldom explored in black films: the multiple identities gay teenagers have to use to adapt to society. Even more stunning is how clueless parents, especially mothers, can be to these realities that are right before their eyes. Alike’s mom, Audrey (Kim Wayans in a revelatory role) suspects her daughter is coming under the influence of Laura, even if she can’t state totally what that’ll lead to. Audrey is typically religious and homophobic…which makes her one on hand wanting to say something to Alike but on the other hand, not wanting her fears to be true.

Which leads her to turn to her husband Arthur (Charles Parnell) for help but he’d rather play it down as if Alike is going through a phase. It’s a sexist view but one that crops up all over the film: women being fluidly sexual. As one of the popular girls at Alike’s school says in passing to drop a hint, “I like girls but I love boys.” Alike only escapes her mother’s clutches at school, where she plays out her alternative self by seeking approval from her favorite teacher or potential love interests. One of whom turns out to be Bina (Aasha Davis), ostensibly introduced by Audrey herself. The two get close, much to the chagrin of Laura but whereas Alike feels real attachment, Bina is merely interested in experimenting until she gets bored.

Alike gets even less from her family. When they sits down to dinner, Audrey alternates between tense and playful at varying speeds that it’s no wonder she’s exhausted all the time. She never expresses it outright but in Alike she sees a type of freedom that she no longer has, the same type her husband continues to enjoy simply as being the head of the home. What Audrey never comes to connect is the control of her life and her own religious upbringing. She’s trapped in a loveless marriage but must endure it just for pretense. It’s what’s expected.

Which pulls to what makes Pariah so powerful: it seamlessly translates into any different set of circumstances that teenagers and parents face in light of a rigid social standard in place to normalize them and their issues. It does a superb job in also, on the other hand, to show us the frailties that face parents of a gay kid. That’s still something very hard for a parent to accept even outside of their own prejudices. Some of these prejudices, handed down from one generation to another, are the reasons why the gulf between parent and child remains so wide. The final scene between Alike and Audrey—raw, emotional—brilliantly plays this sad reality out. Audrey, alas, cannot look past the sin to love the sinner, daughter or not.

The adult life gleaned in Pariah—as in real life—is one of a homogenized and heterosexual lifestyle in a constant state of unison. It may tolerate male philandering but it hasn’t caught up to homosexuality yet. Alike leaves home fully aware of this and neither parent is strong or brave enough to stop her. They have, with or without reason, based on your own judgment, their own struggles to deal with. You see, they too are caught up in a different time-warp which no one else seemingly can understand or reach out to help...it’s just that they have no alternative destination to escape to.

RATING: 8/10
Posted by Immortal Critic at 7:11 AM No comments: Links to this post