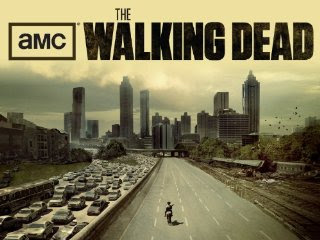 Last year, AMC unveiled a six-episode drama about a zombie-attack world that, on the surface, was to achieve one thing only: lure conspiracy theorists and post-apocalyptic world geeks into one big fan-base. Given the plethora of gore-fest films that horror fans have been exposed to of late, the task was more than feasible. Indeed, we’re experiencing such an overload of senseless, dull zombie films at theatres that it achieves the opposite of the intended shock: numbness. Ironically, the best of the current crop hasn’t even hit local theatres or DVD stores much (REC, REC 2, Don’t Let the Right One In) but rather—and there is rancor on my breath to say this—they’ve been adapted instead. Apparently the likes of Spain and Sweden do horror better than North America and with more intricate layers, i.e. more plot, less blood.

Americans though need to see the carcasses on screen being ripped to shreds by the mindless hoard and when death comes then it must be spectacularly in the head. So while the best parts of foreign zombie films get lost in cinematic translation, the guarded skepticism that met this project-- developed by Frank Darabont—was justified. Yet, when the series premiered in October 2010, it was sheer poetry because it easily found a palatable middle-ground. Season I of The Walking Dead has been rightfully lauded as the best thing television had to offer last year, with its no-holds barred look at how surviving humans deal with incomprehensible loss and their own mortality. It was justly rewarded with the Emmy for Best Television Series Drama in January. Like LOST before it, the fascination lies not with the obvious cat and mouse game with death, but with the examination of the survivors themselves. Darabont is no stranger to directing tense psychological thrillers: he did bring adaptations of Stephen King’s The Shawshank Redemption & The Green Mile to theatres and critical acclaim. Here he worked seamlessly with material originated by Robert Kirkman and Tony Moore, which itself was inspired by George A Romero zombie films.

The series revolves around former deputy sheriff Ricky Grimes (Andrew Lincoln) as he guides a small band of survivors, which include his wife and son, towards any hope of life across the zombie-filled landscape. Each new episode brings some new pulsating twist that tests the group’s sense of loyalty to each other. Season II opens with Grimes reflecting with his walkie-talkie on what CDC scientist Edwin Jenner (Noah Emmerich) whispered in his ear before the entire compound was obliterated. The group heads to Fort Benning but get stalled by a barricade of cars on a highway. In a terrific sequence, they hide under vehicles while the zombies swarm past them, not without incident. Both surviving children have been most affected so far: Sophia (Madison Lintz) gets lost in the woods and Carl (Chandler Riggs) gets accidentally shot.

The season so far has built upon its impressive beginning, while embracing newer elements. When Grimes and Daryl (Norman Reedus) dissect a ‘walker’ (name used by the survivors for the zombies) it echoes the forensics on CSI, albeit crudely. There is even a little black humor; the group breaks into a Church only to find four walkers apparently worshipping. Not only do they slaughter them but then turn around and pray to God in the same building. As we’re progressing, the walkers become less of an obvious menace and the personal tumult among the group is taking over. It’s a risky move and one that clearly highlights AMC’s own tumult after firing Darabont. With new writers come newer directions. While the quality of the show has not dipped, there are some stretches that need closing quickly. The disappearance of Sophia is one and the inevitable clash between Ricky and Shane (Jon Bernthal) for alpha-male supremacy and, alas, the woman caught between them, Lori (Sarah Wayne Callies) is another. We’ve only skimmed the surface of this uneasy love triangle but slowly it is building to a bitter end. Lori remains the most fascinating character and Callies plays her with deft touches of sadness, rage and subdued emotion. Indeed, the female characters all seem to be fighting mysterious, tragic pasts. Whereas the men stereotypically now assume a heightened sense of awareness. Here, Darabont’s vision is missed most because we’re in divisional territory of making the storyline utterly original. The character development is multifaceted yet copious…even the walkers are slightly nuanced.

How it will unfurl is anyone’s guess but as The Walking Dead continues to push more moral issues, the characters become more of a collective shell, especially the women. They are indeed, mother, wife, fantasy and target all rolled up into one. Before now they only had the walkers and their children to worry about. Now, however, with rapt tension building, their faces eye the men more wearily and themselves too. RATING: 8/10
Posted by Immortal Critic at 2:56 PM No comments: Links to this post