Sound of the Scalpel 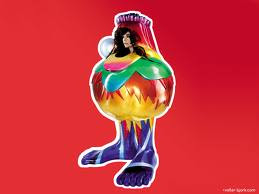 Ever since I heard The Knife's excellent "We Share Our Mother's Health", I've felt it was a subtle swipe at Bjork. How else to interpret a Scandinavian duo but through the lens of the standard we've come to accept and look forward to from that region. Since the mid-1990s, it has chiefly been Bjork that has manned the responsibility for how we listen and judge any electronic music. Her influence has continued to gather much momentum even though her music this decade doesn't command the awe Post and particularly Homogenic do.

That's because she has set herself more insular goals and meeting them means risking clarity for purpose. She has claimed that the album was meant to be mere fun but without her putting clarity up front, Bjork aims too casually at a sound that tries to scalpel its insularity amid many shapeless moods and rhythms. Vespertine was beset by the same issue but where that album veered off when trying to sort out when to attack and when to settle, Volta sits passively by and misses whole opportunities because of its intended fun. It makes for a lopsided listening effect: roughly an album halved by brilliance and halved by indifference. Volta's main crime thus ends up being as a direct result of her own precedence. The songs are determined in their focus and juxtaposition but Bjork can only be judged by her own high standard. Therein lays the rub that confronts the album and its uneven halves. This is her first disc that doesn't enhance her repertoire. She's basically done these songs before and, in some cases, on a much grander scale. Songs like "Dull Flame of Desire" and "Vertebrae by Vertebrae" unfold solidly but not spectacularly and pretty much without any resistance from her. In the past, most notably with "All Neon Like"--the lone questionable track on the otherwise perfect Homogenic set--she was able to masquerade such dullness with a unique perspective and groovy beats.

It's a surefire combination that she can pull off in her sleep but Volta violates itself by allowing too much insularity and a no holds-barred sincerity. Of course, her old habits die hard. Bjork's intuition and gorgeous vocals rescue her every time she sends out the alarm call. The heavily anticipated work with Timbaland produces three stunning tracks: the lead single "Earth Intruders", "Hope" and the lovable "Innocence". Timbaland in many ways proves to be just the right producer for the art she espouses. Both have had long and consistently brilliant careers, without a hiccup. Both point the direction to which others hearken, with outsized, booming soundscapes. Their collaboration allows her to reconnect with the sharpness of her 1990s work which has been sorely missing. It's a defined sharpness that she has smothered for too long.

Three years had passed since this album and that's a long time in music. Since Medulla, another non-American woman has dominated pop/electronic music and that's M.I.A, that darling Sri Lankan who could do no wrong with her stridency and militant beats up to the release of her Waterloo (MAYA). The Knife has risen out of Bjork's shadow as well to produce less obscure yet brilliant pop records. Bjork can no longer rest on her achievements and underestimate the new school's direction and levels of adequacy. Nor can she ignore the strides made by others and not plug into what is current. She ends up plugging into herself actually because so much of what was great in 2007 was clearly influenced by her own style: Deerhoof's "Kidz Are So Small" was the best Bjork-like song Bjork never did and A Sunny Day In Glasgow's "C'mon" wouldn't have been possible without channeling her slightly-off aesthetic. Volta then is part response and part compliance. If "We Share Our Mother's Health" was indeed a swipe at her, she swipes right back with "Earth Intruders". Both are eerily similar. The track opens with lush patter of feet and her voice is like a scalpel again, carving out her intent in a brisk manner. By it's glorious end, her status of boss remains intact. "Declare Independence", a thundering track, recalls the mania of "Pluto" with its 'higher', 'higher' vocal call to arms. "Innocence" fends for itself with a sublime, subtle production and her nosedive vocal work.

Antony (of The Johnsons fame)banters with her on a couple tracks but the best of the rest of non-Timbaland tracks is "Wanderlust". It's the type of sweeping ballad that she does best with just her voice booming out raw emotion. It works so well because she invests more than just an abstract idea...she invests herself. That still remains the lone part of her dominance that her rivals cannot decrease because it isn't something within their collective genius or grasp to control. They have managed to force her hand though and that's a major jolt. It makes Volta her first reactionary record in a relentless career notorious for its proactive approach to nuance. It also makes the next move from that precious imagination of hers an utterly fascinating one with implications for us all.

RATING: 7/10
Posted by Immortal Critic at 4:51 PM No comments: Links to this post

Ok, so this is long overdue. I guess just about everyone has a blog so it's full time I did too. Not that I like to follow what else is out there but in this You tube era, man you've gotta represent. HI, I'm Neil but you already know that....
I'm stalling, I know but not sure for what! My blog will basically be about anything current or past. I'll definately post my stuff here as well as the shit I think that's good, great and horrible (oh, boy, I can't wait).

Personal information: Im single and do enjoy that 90% of the time. I don't get this incessant need people have to pair up as if life can only be acceptable then. I'm 29--there, I've said it but I look forward to my 30s actually. Young people really have it confused and thankfully I'm leaving that bracket. I love sec...enough said

Music. books. films. That's my life. Overtime, I'll get specific but for now my passiomn is my reviews, poems and short stories (I have tons unpublished). There, I'm exhausted...blah blah blah
Posted by Immortal Critic at 4:37 PM No comments: Links to this post