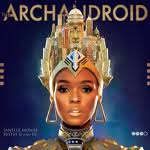 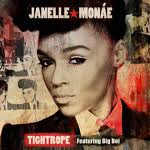 In summarizing Janelle Monae’s Metropolis two years ago, I was surprised how few other critics had cited her as one of that year’s best new discoveries or even bothered to review her EP. It’s not like Monae didn’t have the stuff we love: cool weirdness, undeniable talent plus a kick-ass pompadour. Metropolis was more than an arty collage of pop music; it was a masterful exploration of alien rebellion and love denied. Its idea was not without precedence but it’s been decades since we’ve had a Ziggy Stardust figure in our midst, much less an interesting female version. Through her persona, Cindi Mayweather, Monae unearthed an ethereal yet groovy space that never dropped the ball.

When last we left her, Mayweather was busy dismembering her robotic parts and headed to Earth in hot pursuit of love. The ArchAndroid thus is the combination of her search for Anthony Greendown and the discovery of her own intrinsic value to her robotic race. It’s a Neo-like transition that takes root in historical and colorful literary references but somehow not overburdened by it all. The opus is comprised of two separate concept suites over seventy minutes and garnished with retro musical production.

Suite II leads off with Overture, an instrumentation piece that signals Cindi Mayweather’s arrival on Earth in search of the titular object. Monae steps immediately into a purple patch: Dance or Die is a nifty club number with a stunning guitar rave up towards its end. Faster flames out into a Badu-esque last few minutes that literally bring the funk curtain down on any thoughts of insincere flattery. Locked Inside juxtaposes her lovelorn vocals with a warm chorus and rhythms that wash over in seamless bliss. Come Alive literally does just that under her screams and electronic guitars. Oh Maker is a simplistic ballad but the multiple-vocal work is brilliantly layered to full effect. Mushrooms and Roses, a track dipped into so much Prince-like energy that by the time the electric guitars trip in you’ve already died and gone to heaven. These are simple songs but when the music is this glorious then it feels miles ahead of anything else R&B has now sake for Badu and Santi White. Cold War and Tightrope, the first two singles, both gloriously expand on Monae’s funk credentials. Tightrope evinces so much dirty funk that it’s hard to imagine your midsection not quivering under its command. Cold War ups the amps with its horns and irresistible beats. At such groovy moments, she becomes inhabited by a huge source of proto-funk, the source origin I’m still trying to figure out but all those years hanging around with Outkast have clearly influenced her.

If it had ended there then it’d be perfect but as Suite III’s Overture gets going, one realizes that if her focus was on satisfying our needs before, now she’s about to refocus on her mission. Neon Valley Street pulls off the Badu-esque trick but there’s something missing from the glint in her eye. Suite III totally slows down her frantic pace and thus we are finally forced to face the naked aim of this effort. The ArchAndroid stumbles in the homestretch though because of the overlap of different directions.

Which is frustrating because her aesthetics slightly suffers by trying to cram diversity where staying on point would’ve sufficed. The duet with Of Montreal (Make the Bus) is contextually mismatched here and as brilliant as Wondaland is, it only leads into the puzzling last trio of songs. These are the songs that focus exclusively on Greendown (57821, Say You’ll Go & Babopbyeya) but, unlike Metropolis, the focus on him here is plaintive. It’s as if the exhaustive nature of her genre-exploration has finally caught up with her.

This is not to distract from the praise Monae has been getting from critics. Given the heavy staleness that hangs over contemporary pop her attempt to bring something new is good. Never mind the fact that this gushing critical love is belated, The ArchAndroid is an established body of work from which to spring from. It doesn’t have masterpieces like Many Moons or Violet Stars Happy Hunting but it marks the point at which we’re making Lauryn Hill comparisons and fast-tracking to next year’s Grammy acceptance speech for Best Album. We’re all playing our part now in recognition of her talent and hype. How else could Clayton Purdom (cokemachineglow.com) write that her music is exactly the type of stuff we’ve (serious music lovers) been waiting for since ever. Oddly enough, he further states that while The ArchAndroid isn’t his favorite album of the year, it’s the best by far.

As someone who’s been in her corner since the start I read conscientiousness in such a statement as well as fiction. It’s a good sophomore but let’s not add pressure by applying the term ‘epochal’ because that only terrifies me as to the great expectations being put on her now…the same expectations that have irrevocably wrecked D’angelo and Lauryn Hill. The same expectations that had Badu sit out five years due to writer’s bloc. For now though it’s just enough that our heroine is still firmly caught up in the hunt for her true love. The only difference is that now she knows that her worshipful audience has finally shown up to register its support.