Thieves In The Temple: An Appreciation of Prince and David Bowie... 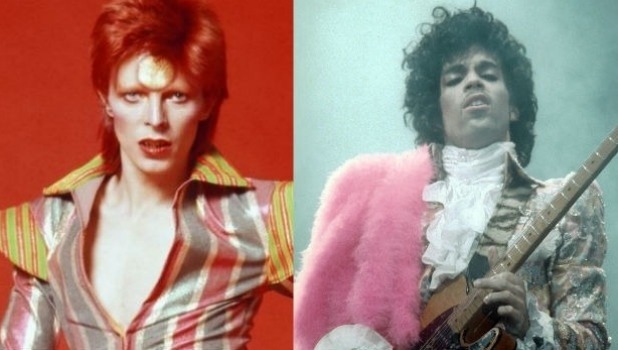 I’m beginning to view my friend Emma Lewis as some sort of harbinger of entertainment doom. Back in January when I posted a review of David Bowie’s fantastic new album, Blackstar, on to my blog, I sent a copy to her on the fourth day of the year and six days later, I woke up early in the morning and read a very polite tweet she sent: a developing BBC report that Bowie was dead. Fast-forward to three months later, and I returned home after a supermarket run and there was another Emma tweet about Prince and his death. It took a while for the realization to hit but as I reached for the remote to turn on the TV, I sat down fearing the worst. Emma’s tweet had struck again!

The passing of both musicians dominated the news cycle over a twenty-four hour period, only punctured by the scant official information from their respective families and an even scanter burial process. In an era where everyone has a short attention span to any one news item for too long, it was touching to see stations like BBC and CNN break away from the new normal and stick with their coverage. But many younger music fans wondered why? Neither Bowie nor Prince were even on the pop charts at the time of their deaths even though neither had completely gone away from the realm of music. Here in Jamaica, the “Billboard generation” were in unison trying to figure out who the hell David Bowie was. Some even had no idea who Prince was until they heard “Purple Rain”. For some, not even that helped.

While Bowie’s influence as an artist may be harder for them to recognise immediately, it’s difficult to imagine why Prince was drawing so many blanks: he would occasionally be played on local radio or even at the soul music section of every dance/club right there with Michael Jackson and Whitney Houston. Personally, if I had I been a teenager in 1984, ‘Purple Rain’ fever would have no doubt engulfed me but all I remember of that year honestly was the Los Angeles Olympics and Merlene Ottey. It would take my high school years and Marlon James to bring Prince squarely in my music appreciation. Back then, James was writing brilliant music reviews for the Observer and Prince was mentioned in every single one of them. Bowie featured at times too. James would use both men to illustrate how daring an artist could be and how fearless, especially when bending the rules of pop music to serve their own purposes. But it wasn’t just their music that bonded fans to them, it was their unique style and fashion that transcended gender norms and challenged convention shamelessly and with very little restraint. Where Bowie applied gaudy mascara and dresses to confuse us with ambiguity, Prince put on pumps and writhed his hips as a call to arms and still got your girlfriend. Both were foraging into untapped version of pop music and culture, building glorious uncertainties along the way, both springing fully formed from the mount of the well Little Richard originated.

I came across a Popmatters article written by Joseph Vogel that explained how Prince was depicted as a sort of licentious rebel. He was deemed as the raw, self-taught genius from the streets of Minneapolis and sex and transgression. The same applies to Bowie but his aesthetic was unreservedly rebellious, queer even. He drew all the freakish fringe groups in society unto himself long before Madonna collected her underground gays and Lady Gaga had her little monsters. Bowie originated the school of thought that pop stars must continually change up their approach with every album, that they embrace technology and new music ideals. The 1970s saw him morphing from gender-identity questioning (Hunky Dory) to alien sexual life-force (The Rise And Fall Of Ziggy Stardust & The Spiders From Mars) to total music abolitionist (The Berlin trilogy). And, in America, it was Prince who took up this challenge long before it was fashionable to do so. Prince didn’t just bask in the task of shocking fans with lyrics but with performances too. Even before Purple Rain cemented his status of legend, albums like Dirty Mind (1980), Controversy (1981) and 1999 (1982) had ingrained in the American collective that some sexual yet undeniably beautiful monster was raring to get out of him.


Several leading music publications have since lauded Bowie as the most influential rock artist of all time and it’s pretty hard to disagree with them. If we say Bob Dylan is the greatest cultural solo artist in music history, no one can deny that but Dylan’s influence is so encompassing of American culture that he remains an unlikely figure-head for anyone in this generation to even want to replicate. Mark you, Dylan influenced Bowie but not musically, just in the sheer stubborn way geniuses develop music. Like Prince, Bowie was a genius one deemed friendly enough to copy or to openly gush about. You could imagine jamming at a concert with both or grabbing a pint—Dylan, not so much. A huge part of it is the willingness of these artists to realise their scope on pop culture and respond to it. Look no further than Bowie’s “Changes” and its open-ended meaning. Both men were able to operate within a chart-driven industry too yet not be slaves to Billboard numbers in the pursuit of their craft. Who can forget when Prince stopped using his name and sported a symbol on his face in protest over his contract? The money side of the industry didn’t interest him even though I’m sure he was proud of Purple Rain’s twenty-four consecutive weeks atop Billboard Albums chart, a feat that clearly won’t be duplicated.

Nor will their individual greatness ever been replicated but every time you listen to D’angelo, Miguel or even Frank Ocean, et al. you hear distinctly the influence of Prince. As for Bowie, every British artist from the last thirty years who has made it big in America owes him a debt. Yes, even your precious Adele (and she has acknowledged such). It not even just the young artists who are indebted but some even older. Prince gave Sinead O’Connor her break with “Nothing Compare To You”, Chaka Khan got “I Feel For You” and The Bangles got their first top 10 global hit when he rebooted “Manic Monday” for them. As I saw Stevie Wonder tear up on CNN with Anderson Cooper over Prince’s death and grappled with that---I mean, this was the iconic Stevie Wonder---I couldn’t help but feel the need to play “When Doves Cry” that night. I had done the same with Bowie’s “Young Americans”---both songs are perfect pop summations not only of the respective careers of both men but of the way they elevated music to an art-form. I haven’t stopped playing either since…


Posted by Immortal Critic at 1:49 PM 2 comments: Links to this post