'two emcees can’t occupy the same space at the same time…’ (Fugees, ‘How Many Mics’) 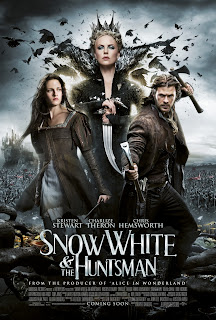 The Hollywood version of Snow White has been around for a long time but as the movie industry is always adapting, it keeps on reliving the tale to varying degrees of success. 2012 has been particularly hectic with it: we’ve seen the slightly-off TV series (Once Upon a Time) end its first season with its big revelation and earlier in the year Mirror, Mirror showed us Julia Roberts as the non-traditional looking evil queen. With so many variations out there, the trick to being relevant is to create something one hasn’t seen before and exploit it. Mirror, Mirror wasn’t a great film but it did offer a more appropriately jaded view of the queen and her fragile ego.

Snow White and the Huntsman allows you a mere twenty seconds of vulnerability from Ravenna (Charlize Theron). It takes her literally that span of time to shift from political captivity to queen of the land. It’s made official after she stabs king Magnus (Noah Huntley) on their wedding night…which, if you need to know, is the day after she was ‘rescued’. As the script doesn’t clarify much in haste to get to the story, one presumes that Magnus has been single for ages and clearly horny but honorable. In any case, he pays with his life (“you’ll be the ruin of me”, he states to her at one point) and Ravenna lets in her army to rule. Why she kills him is not immediately clear—they have only known each other for forty-eight hours—but, in her lone scene of respectability, Ravenna makes it understood how cruel the laws of attraction are to women…and how ongoing it is as long as there are younger, more beautiful women to come.

If she strikes you as feminist then you’re betrayed right away by her confidantes: her brother, a vicious creature Finn (Sam Spruell) who is only kept in check by her black magic and her mirror, the entity that keeps her mind in flux with truth, which--when consulted--steps out of its frame in a shrouded figure and speaks its mind very freely. It’s a bizarre twist because it’s a ‘male’ mirror that’s in a sense using her insecurities to flatter her. She stares at the entity as if needing its approval, her mirror image barely visible. Between it and her brother, we see that her ‘power’ is determined by their discretion and actions. When she is informed that Snow White’s (Twilight’s Kristen Stewart) beauty has surpassed hers, she sends Finn to get her but Snow escapes into the Enchanted Forest.

This absurd plot allows for the huntsman (Thor star Chris Hemsworth) to come into the frame. Incredibly---even though she had at least a day’s head-start—he catches up with her (no doubt with primeval GPS tracking) quickly. He is brutal, efficient and clueless (apparently, the only one in the kingdom who doesn’t know Snow). Once he finds out though he wants to abandon her but the queen’s men get hot on their trail, forcing him to stick around. This leads them to a band of rogue dwarves and they take them in.

What becomes progressively weak here is the atrocious writing (Evan Daugherty, Martin Solibakke). Given that this is mostly adapted, one is puzzled by the hash job done-- everything is predictably trolled from similar themed films: a white, heavily-antlered stag appears but doesn’t speak (a Narnia moment). The wise, blind old dwarf Muir (Bob Hoskins), out of nowhere, proclaims Oracle-like that Snow is “life itself” a-la Matrix. Snow rouses the troops for an assault for battle taps into Lord of the Rings territory and everything the queen does is hideously Shakespearean. Theron is so bad here that I’m sure organizers of the Razzie awards are making notes already of whom their Worst Actress category winner simply must be. She reportedly dropped out of J. Edgar to do this film so I take it that the lure must have been a huge paycheck. That paycheck surely must account for a huge part of the hefty $170 million production cost because the film looks cheap with terrible special effects.

The film’s body politic surrounding the queen and Snow White remains strange even up to its dull conclusion. The director, Rupert Sanders (in his debut) is not concerned with transcendence but more so that you get the generic point of how life-sapping the queen is…as if somehow you’re in danger of ever forgetting it. Snow White and the Huntsman never looks back to see how Ravenna gets to be the monster that she becomes, just a brief glimpse on the effect of her own mother’s words and charms upon her. That within itself is a key satirical point missed—that of promises being a comfort to a fool…especially one (in this case, Ravenna) who is used to hearing them and falls for them nonetheless every time. From her mother to brother to mirror to scared subjects, Ravenna’s been tossed around into a constant state of damage and delusion. She’s just never had the willpower to acknowledge it. And that is exactly the terror this sad excuse of a film misses.

RATING: 2/10
Posted by Immortal Critic at 6:27 PM No comments: Links to this post