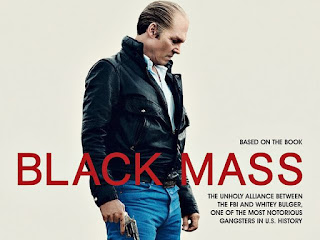 First, the obvious: yes, this film will remind you of Martin Scorsese’s Oscar winner, 'The Departed'. As it should because both are inspired by the same source material; the 2001 book 'Black Mass: The True Story of an Unholy Alliance Between the FBI and the Irish Mob' by Dick Lehr and Gerard O'Neill.

And if you still had any doubt, director Scott Cooper ('Crazy Heart', 'Out Of The Furnace') fills every scene with reminiscent shots, so we get the obligatory Irish bag pipes and heavy Brooklyn accents on heavy-set men who all look a little too familiar with murder. The difference between the two films is as fascinating as what both omitted. Whereas 'The Departed' was merely influenced by James “Whitey” Bulger’s notorious rise, 'Black Mass' totally sacrifices everything human about him to elevate monstrously into a criminal caricature.

In such caricature, Johnny Depp shines as Bulger, totally convincing with slicked-back balding hair, bad teeth and piercing bluish contact lenses. Given that his career is in the doldrums, it’s great to see the slide halted (hello Nicholas Cage!) with this role that is sure to delight his many fans. He devours every scene with his presence and hint of uncontrollable rage. This rage we see early one, making 'Black Mass' successful as we see his slipping from a semblance of a family man into a web of destruction. The more hideous he becomes, the more Depp throws everything into it--at times the tension in his body evidently under the mental strain it must take for such hardened men to operate.

The downward spiral of Bulger however is where 'Black Mass' falters. This is, chiefly, because Depp is the only one given an unrestricted leash and every leash eventually needs to be reeled back in. The rest of the actors, including Benedict Cumberbatch, who plays William his powerful brother, wastes away in offices, seated by the film’s writers, literally stuck, just as how whole 'Game Of Thrones' characters had to sit out this season because George R.R. Martin hasn't figured out just what to do with them yet. The writers, Mark Mallouk and Jez Butterworth, decide to throw whole parts of Bulger's life out, thus making the other actors feel tacked-on: Peter Saarsgard has a memorable introduction then goes out inexplicably without much of a fight. Ditto for the FBI agent, John Connolly (Joel Edgerton), the man who helped protect Bulger’s cover as an informant. The context of behaviour is missing in 'Black Mass', making it engrossing but one-dimentional when one really stops to consider what would make these men act oe react they way they did.

Maybe because the book on Bulger is still fairly fresh the writers wanted to focus on him primarily but biopics don’t have to be based on ancient material to incorporate a great script—look how great United 93 turned out and that was released just five years after 9/11.
It’s interesting that Bulger’s long-time girlfriend Catherine Greig is absent from the film, as if to indicate his notoriety was so beyond any outsider influence by that period on his life. As if he was already beyond vulnerability. That’s what this film needed a little more of when Depp was not on screen to help unravel all the mysteries surrounding his life, which he keep so well hidden under those sad eyes and hollow cheeks.

As for the other obvious question that will linger long after the credits roll: will Johnny Depp land an Oscar nomination for his performance, the jury is still out on that for several reasons. Yes, he carries the film, dominating every frame but when it collapses into moments of disconnect and weirdness, it drags him down too: trying to reconcile his humanity at the loss of his son or when confronted in a situation beyond his power. Unlike when Jack Nicholson tore Frank Costello into pieces of sublime madness in The Departed, Depp has one shade throughout Black Mass. If Nicholson, clearly the superior actor didn’t snare what seemed like a sure nomination then it is likely Depp will fail as well. Don’t bet your house just yet, is what I’m saying.

Posted by Immortal Critic at 4:56 PM 4 comments: Links to this post