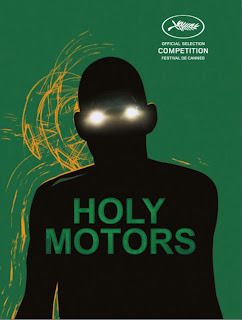 One of the great disappointments of this year’s Oscar nominations was the absence of the French film Holy Motors from all the categories. The film had left most critics salivating at the Cannes Film festival and scored rave reviews especially for its unique perspective of its art-imitating-life plot.

It starts subtlety by juxtaposing the cinematic experience as is now—persons silently watching a movie—to how it will be in the futuristic manner director Leos Carax chooses by having our protagonist Oscar (Denis Lavant) literally jump into his ‘role’, seemingly inside the movie theatre. Oscar wakes up; puts on his glasses and forces open a door that leads to a flashing light. He passes through another door and lands right in a stunning shot of him, towering above the movie-goers while a giant dog prowls the aisles. Carax’s homage to film becomes immediate yet lurking beneath this abundance of rich imagery is human passion itself and self-sacrifice, the type that, like the dog, goes unnoticed and unappreciated.

Oscar is an actor who gets chauffeured around to his roles in a white limo that’s driven by Celine (Edith Scob) who clearly doubles as his personal assistant. The limo too serves a double purpose—a dressing room, where he changes costumes, a place to apply make-up and rehearse lines for his next project. We follow as he changes into an old crone begging beside the Seine; a crazed, barefoot troublemaker in an ill-fitting green suit kidnapping an American model (played by Eva Mendes) during a photo shoot and carrying her away as if he were Quasimodo; a hit-man hired to kill his doppelgänger; a father concerned for his daughter's safety; and the cheerful leader of an accordion band performing in a candlelit church.

As with most French directors though, Carax uses everything compressed in Holy Motors to mean something else or serve as a heavy dose of symbolism. The limo ride is clearly the path all actors have to take and Oscar’s many roles seeping into each other exemplifies the interchangeability of an actor’s work. These are the obvious points but one would have to be versed in Carax’s own previous works and influences to pick out the rest.

Just like The Artist before it, Holy Motors is an expose on artistic insight and the metamorphosis that has taken place. The film moves at a sinewy pace, dragging cinematic changes as it goes along to the point where the audience can no longer tell the difference between acting and the real thing. Oscar himself is slowly losing grip on his own reality, a point reinforced when he accidentally runs into a former lover Jean (Kylie Minogue) and the tenderness they share reminiscing. As they roam the street, you realize this is real even if the invisible cameras are never shut out. He quizzes her on her appearance (is is really hers or for a role) and carries her up steps where she belts out a tune before getting into character and jumping to her “death”. Oscar’s sense of reality betrays him after he just barely manages to get out of the scene in time to see Jean’s lover racing up the stairs in pursuit of her. As Oscar strolls out, both bodies are on the ground, Jean’s brains splattered along with blood. He loses it and races for his limo. For a terrifying second, you can’t help but think that, at last, Carax is about to unravel some hidden meaning to Holy Motors but instead it soldiers on fully aware that its appeal is its aloofness.

This aloofness is spurred on by the final two scenes: Oscar reaching “home’ to his pet gorilla and saying goodnight to Celine. She drives away, signaling the end of the day and eventually parks at Holy Motors, which we can see is the hub for the vehicles. She gets out joining the other such drivers, hair down and puts on a green mask. “I’m coming home”, she whispers into a cell phone and strolls out of our sight. As the lights go out to leave us pondering if Celine is unto her own acting adventure, Carax arrests us again with a bit of magical realism. The limos begin to speak to each other and the moral point of the film becomes clear.

Depending on your patience and appreciation for art-house films, this will either spoil or enhance your opinion of Holy Motors. It is visually stunning but life as viewed through Carax’s lens is unending and repetitive. It’s also secretive and resigned to fate, only the limos of the industry grouse openly about where next film will leap to and if it will need them anymore. Already the film shows how, like high definition (HD), enhanced and real the viewing experience is and how much more people want from it. Oscar, like the other weary actors are only starting to suspect what Carax built this gem around: when people get what they want, they never really want it the same way ever again.

Posted by Immortal Critic at 3:02 AM No comments: Links to this post